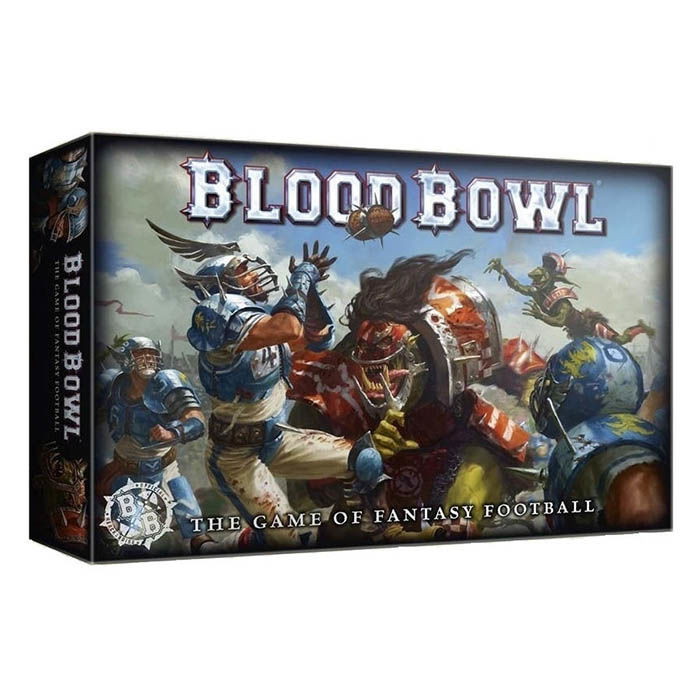 The classic game of fantasy football is back!

A combination of strategy, tactics, and absolute mindless violence, Blood Bowl is the classic game of fantasy football. 2 players act as coaches, selecting their teams from rosters of Human and Orcs and taking to the playing field to earn fame, fortune and the adulation of fans along the way!

Included in the box

Everything you need for yourself and an opponent to play bone-crunching games of Blood Bowl:

-        12 plastic Human players: 2 Blitzers, 2 Throwers, 2 Catchers and 6 Linemen;
-        12 plastic Orc players: 2 Blitzers, 2 Throwers, 2 Black Orc Blockers and 6 Linemen;
-        extra balls, team counters, and bases featuring holes to place the ball in, indicating possession;
-        a double-sided foldout card pitch - one Orc side, one Human side, each divided into squares to regulate movement and combat;
-        2 card dugouts, each with a Human teams sideline on one side and an Orc sideline on the other;
-        a deck of cards detailing Special Plays and Star Players, as well as references for the included miniatures;
-        2 sets of dice, coloured blue for the Humans and green (of course!) for the Orcs - a mix of D6 Block dice, ordinary D6s, D8s and D16s;
-        a 56-page rulebook - this contains the basic rules of Blood Bowl, a number of optional extra rules (Fan Support, different weather, Illegal Procedures, time limits, hand-overs, block assists and more), a guide to assembling your teams and the story of Blood Bowls origins;
-        a range ruler (used for measuring distances when throwing the ball), scatter template (used to see where the ball careens off to when dropped) and throw-in template;
-        a sheet of decals containing number and team symbols, and a list of player positions that can be applied to the edge of your models bases.